This month, Harvest chats with Stephen Hodde of SoundSpank, whose work
is at the forefront of interactive online sound design. With a background in music production, Stephen combines his skills and experience with the latest technology to create entire emotional experiences through his audio creations. The span of his work includes
sound and music design for commercial and movie sites, including the
spectral-sounding suite of effects for 30 Days of Night by Big Spaceship, a Sony Pictures production.

In this interview, Stephen tells us about how the sound and the music
come together, how he keeps track of the business side of things, and
what else SoundSpank has in store. 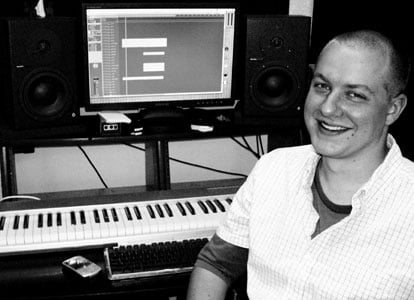 Give us a brief background on Soundspank. What is it that you do and how long have you been doing it?

In its current form, SoundSpank brings film-quality music and sound design to the web. The goal of SoundSpank is to push immersive boundaries of online audio to its furthest potential; to treat online entertainment as the superior platform that it is.

The company itself is truly in its nascent stages… it’s not even teething. I’ve been involved in music production for about 9 years, and specifically for the web for 2.

You’ve worked on some high-profile projects while working with Brooklyn-based design firm, Big Spaceship. What are some particularly memorable or fun projects for you? 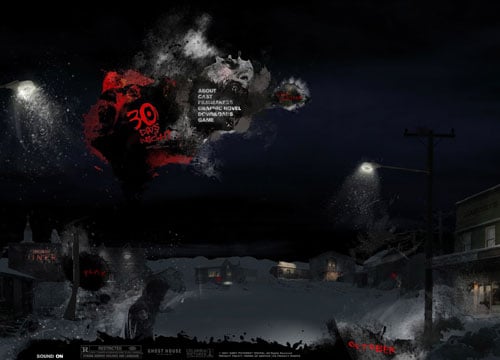 30 Days of Night, the official website by Big Spaceship, sound and music design by Sound Spank.

Big Spaceship is a supremely special place. The work keeps getting better and better with every new site they release. The work they do is truly cinematic in scope.

I think my favorite project has to be the 30 Days of Night sites we just finished for Sony Pictures. That suite of sites has everything, an immersive parallax environment, a mini-game, and an online multi-player, real-time fighting game. I was able to write music referencing Penderecki, Muse, and Jim O’Rourke as well as design vampire death screams, gunshots, foley, ambience. You name it, it’s there.

My sister was so scared by the site that she couldn’t go through with whole experience… and she’s 26 years old. That’s pretty satisfying.

Do you have a process to your madness? How do designers/art directors typically work with you to create the soundscapes they’re looking for?

Mostly, I see a doctor about the former… As for the process, I sit down with the art directors at the project kickoff and begin discussing the aesthetic and the end emotional goal of the site. If it’s a movie site, generally that has been handed down to us by the filmmakers. If it’s a commercial site, we have to sift through the marketing doublespeak and figure it out. It’s an ongoing dialog as the design comps are approved and the visual direction changes.

Visual artists tend to communicate more effectively with textural and elemental vocabulary (glass, metal, rock, etc.). As froufrou creative types, we’re also good at expressing feelings which helps specify the tone of the piece. I’ll try to incorporate those textures in their literal form, say the sound of rubbed metal or breaking glass, manipulate those sounds with digital signal processing; it’s a theme and variation on that. 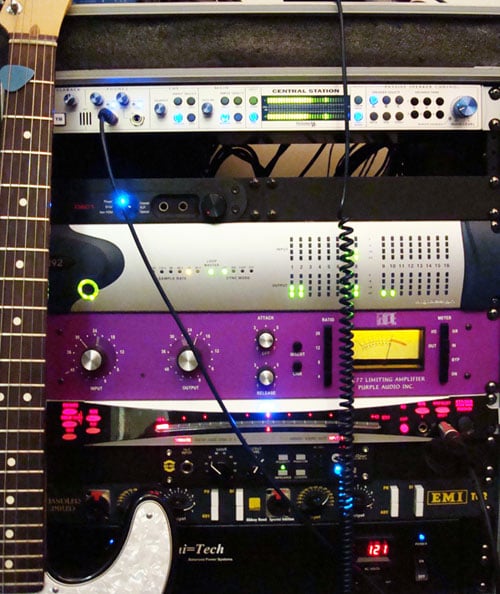 Can you talk a bit about your early days? You produced, programmed, and mixed records for various independent New York area artists. How was that experience? And how has that filtered into what you are doing now?

When I worked with bands I always asked them to write a scene, an environment that the music would live in. I wish I still had it, but one artist wrote out a 2-page story about a young boy that was running through the forest (with fairies) and he was looking back a lot, but he wasn’t a really a young boy, he was an old man… et cetera. This was the world he wanted his song in. How do you write music for a forest chase scene featuring a man/boy and fairies? Does it even make sense? I don’t know.

There’s an additional layer of complexity with interactive. Sound is often not a fixed, stagnant object. Listeners take ownership over interactive sound in a way they don’t with records.

Working with bands, you don’t really need to worry about referencing other aesthetics or prior works; you’re constantly trying for something new and different. That doesn’t always suit the needs of a commercial project. I do miss the bandwidth of records. No compression. All PCM, all the time.

So now you’ve established a business in music production and sound design. How has it been juggling the business side along with the creative side?

That’s actually a deceptively personal and philosophic question. My father was an investment portfolio manager and my mother a piano teacher. It comes naturally to deal with both; I derive a certain pleasure in business administration that the creative side can’t offer, and vice versa.

How has web-based applications like Harvest played a role in getting your business up and running?

When you first start a business, understanding how much work you can take on can make or break you. Harvest allows you to dissect on a granular level each repeatable task you perform, providing valuable analysis on where you have room to grow, or where you need to trim back. The more tasks you track, the more simultaneous services you’ll be able to offer reliably.

What are you goals for the business in the next year? Any exciting things in the works you’d like to share? 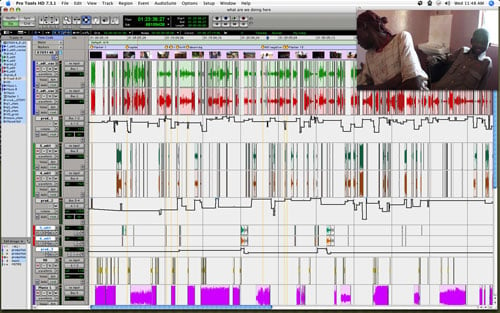 My goal for the next year is to grow my services beyond the interactive industry and work on at least one project in broadcast/TV, film, interactive, record, and video game mediums.

It looks like there’s a lot of film work coming down the pipe. I just mixed an amazing documentary on the United States’ role in aid to Africa. I also just did some sound design for my first feature film that went to the Toronto Film Festival. In addition, I’m in talks to score an indie feature in early 2008.

My wife and I are also in the process of finishing a record that we wrote together and we’re moving to the west coast.

Any words of wisdom for anyone who’s interested in getting into sound design and music production?

It’s easy to get bogged down in technicality and method. Whether it’s music theory or which piece of gear has the greatest feature that promises to change your life. Your job is to impact the listener on an emotional level in a new and interesting way. And, uh, don’t be a jerk.

Thanks goes out to Stephen Hodde of SoundSpank for the fun and insightful interview!