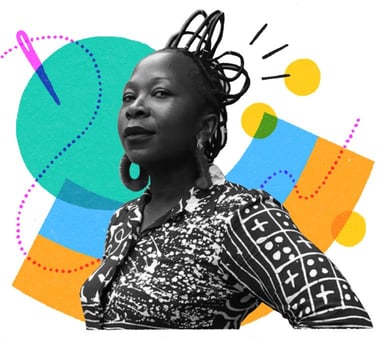 When it’s the little steps that add up, what will shape this season of your life?

This interview, which has been edited and condensed for clarity and to focus on themes of time, draws from a live interview and workshop.

Busayo Olupona is a lawyer and the founder and creative director of Busayo NYC, a colorful, expressive fashion company that explores the power of textiles to connect past and present through the traditions of Nigeria, the country where she grew up.

Before she dared to follow a creative path, Busayo studied business and went to law school. “My initial path as a lawyer can’t really be separated from my immigrant background,” she says. “I’m a child of Nigerian immigrants who sacrificed a tremendous amount for us to come to the US. In that sacrifice, there was a push for my siblings and me to go into fields associated with success.”

After six years of working in an elite law firm, grinding through 80-hour weeks, in 2011, Busayo turned her dream of starting her own clothing brand into reality. Now, a decade later, Busayo NYC’s spring 2021 collection will be available at Saks Fifth Avenue and Shopbop. She’s also a voracious reader, a self-described James Baldwin super fan and, after taking a break, continues to practice law in New York City.

We spoke with Busayo about juggling dual career paths, following curiosity, and myths about time limits for success.

Busayo, how do you think about time and age when it comes to your legacy and life dreams? Is it ever “too late” to pursue a passion?

I think that it’s important to focus on the particular season of my life. Right now my focus and energy and attention is on my career and my work. Resistance comes in every form: it’s feeling like you’re too old, you’re too young, you’re too Black, you’re too whatever. There are things that are cabined by time, like biological clocks and having children, but with our dreams and what we’re here to do? Absolutely not. Artistic expression and self-expression? That’s timeless.

I just so happen to be in a community of friends in their forties and fifties who are “making it” later in life, though I don’t think there’s actually such a thing as “making it.” For my friends now who are writers and directors, it took them 10, 15 years to get where they are. I think we don’t see that timeline. On social media, we’re often seeing the end product, and we’re not seeing everything that people did along the way.

One of my dear friends just directed and acted in her film The Forty-Year-Old Version. She’s 44 years old. You can see it on Netflix and it speaks to this point. I have another friend, who just wrote her first major film at 52. My community is full of people who are my age and coming into their own. I am so blessed to have these real-life examples all around me.

How did you navigate the fear of the unknown when you started to make time to pursue your creative dreams?

Starting a clothing brand was an artistic endeavor that was actually meaningful to me. But I didn’t see the path to get there at first. It felt so overwhelming.

I remember one conversation with my colleague and friend Ricardo. I was telling him, “I want to start a clothing brand, but I don’t know how to do it. I don’t know anything about clothing.” I gave this whole speech to him while we were sitting in my office. And he said, “Well, how did you become a lawyer?”

I was like, “I went to school and I read books.”

Then, he got up, walked out of my office, and slammed the door. I will never forget that. I was like, “That is so rude.” But I think he wanted it to get to me, that it’s no different than any other pursuit. It was no different than how I became a lawyer. That was the first clue: I could read books. I could take classes, the same way I went to law school, and that would maybe get me on the path. That was a major brain shift for me.

The other was that I would make clothes in Nigeria, which has an ecosystem of textile production. That’s a major benefit that I had.

Then, I had these clothes sitting in my house, but I didn’t know how to sell them. I was afraid. Again, I was making it a problem. I was telling another colleague, Helen, and she said to me, “I have a friend who has a showroom on 38th street. Why don’t you have a pop-up there?”

People around me were encouraging me to put myself out there. But it’s not easy. It was terrifying because this was the first time that I was actually showing something of myself to the world. In the beginning, these little steps began to add up. You can’t skip any of that.

“It was terrifying because this was the first time that I was actually showing something of myself to the world.”

Career timelines aren’t always linear. What has surprised you in your path?

Your path might be crazy. It’s not always going to be a straight line. For me, at a certain point, after running Busayo NYC full-time for a while, I knew that I needed to get another law job to be able to live in Brooklyn and keep looking fabulous, and that’s something that I did. Initially, it felt like a failure: like, how did I not make this work? I should be living off my fashion. But it ended up being a big blessing for me.

“Your path might be crazy. It’s not always going to be a straight line.”

What tools have helped you to chart your course and manage your time?

I resisted meditation so much because I thought that it was about stopping the voices in our heads. I don’t know where I got that from, but it’s impossible. You can’t do that. The days that I meditate and engage in my morning practice, I am much more productive and I just get shit done. It’s almost like there’s an internal mechanism that is in tune with universal energy — I sound like a new age quack — but that energy is turned on when I meditate. It allows me to clear things that are not as important out of my day.

I did not become a meditater until I was 40. And, it was pretty much on doctor’s orders that I started, but It has really changed my life. Days that I’m like, I’m too busy, I don’t have time for that, it’s almost like I’m spinning my wheels. Even though I really resisted it, meditation has become a critical tool for me.

For me, mentorship has also been key. I have a mentor, Mercedes Gonzalez. Every time I’ve been stuck, she delivers a kick in the pants and helps me to problem solve. I also have amazing siblings and friends. I talk with them about everything that’s going on.

“The days that I meditate and engage in my morning practice, I am much more productive and I just get shit done.”

As a fashion designer, business owner, and lawyer, how do you juggle multiple projects at one time?

You have to pick and choose. I can’t do it all. I really can’t. I try, and it’s not a good idea because I get tired and then I don’t get enough sleep and then everything else goes to shit from that. I’m learning that I have to start saying no, which is hard for me.

I do the typical list-making. I have to prioritize the challenges I’m having. It’s also helpful having a coach to come in and say, “Hey, you said you were going to do this. Why haven’t you done it?”

I don’t get everything done. I’m only one person. So I prioritize. I do the best I can. And then I forgive myself for the things that I wasn’t able to do. It’s that simple.

“I do the best I can. And then I forgive myself for the things that I wasn’t able to do. It’s that simple.”

You spent time reading every day. Which books have made a big impression on you?

I am a consummate student. Everything I know, I got from books. There is no new knowledge under the sun. Books help me see connections between things where there doesn’t initially appear to be any. A few favorites favorites:

“Books help me see connections between things where there doesn’t initially appear to be any.”

Imagine you’re reflecting at the end of a day or other period of time where you felt that your time was well spent. What did you do? How did it feel? How much time did you spend doing it?

I’d pursue the things that invigorate and make me feel alive: introspection and connection with the divine, exploration of my curiosity, connection and playfulness.

Morning practice (2 hours)
A day well spent must start this way, with the opportunity to move my body, get quiet and connect with my divinity, and nurture a sense of playfulness:

Textile design and color exploration (4 hours)
So much of my textile design process is an exploration of my curiosity and nurturing the inner child’s desire to play with color and create where there was nothing before.

Thrifting in Brooklyn (3 hours)
I love the discovery and hunt of thrifting for books. I buy 90% of my books at thrift stores and there is nothing I love more than a book finding me rather than the other way around. So much of what I read are things that I came across through the serendipity of thrifting.

Calls (2 hours)
I call my folks in Nigeria for updates on our various projects. This is about human connection and relationship.

Reading (2 hours)
I’m a crazy book nerd so I read a ton each day. This is nurturing my curiosity and feeding disparate ideas into my mind. Books are such a critical part of my life and I can’t imagine a day well spent without them. 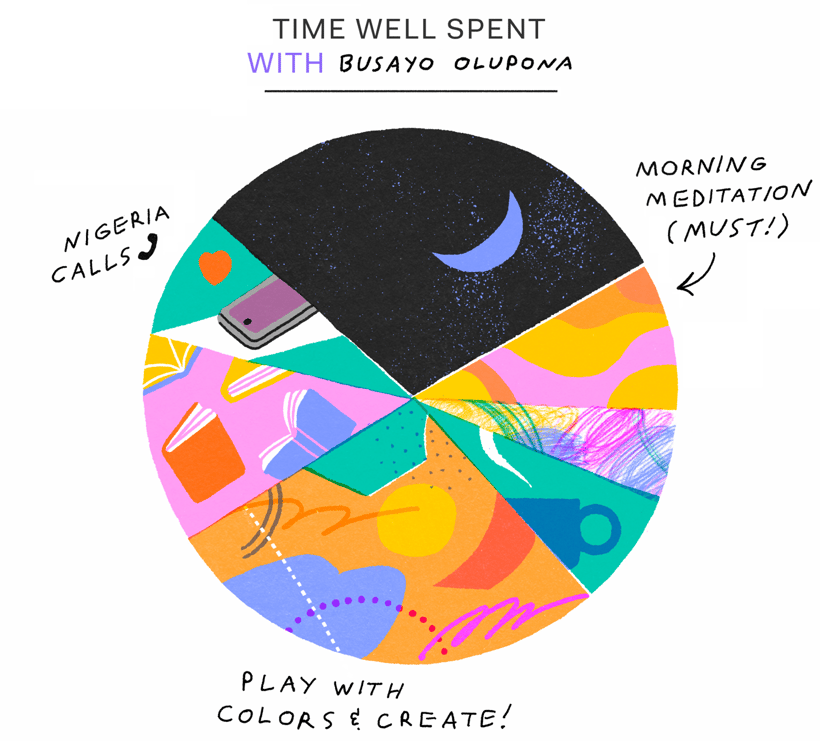 Watch the recording of the FieldTrip “On Mapping Your Path and Getting Out of Your Own Way: A Conversation with Fashion Designer Busayo Olupona" and the related Q&A with Busayo to hear more of her wisdom on finding a creative path and growing despite fear.