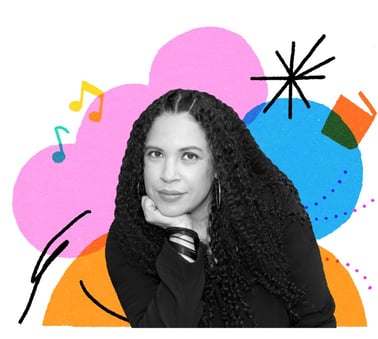 How long is the path to self-discovery?

Lacey Schwartz Delgado is no stranger to navigating complicated paths to self-discovery. In her personal documentary Little White Lie, Lacey unravels a family secret that hid the truth of her identity, a process she hopes helps others reflect on their own stories. To help foster this type of reflection, she designed The Truth Circle game, an interactive game designed to guide deep discussions inspired by the core themes of her film, including complex racial identities, family dynamics, and personal truth.

In addition to being an award-winning director and writer, Lacey is the co-founder of Truth Aid, a multimedia production company devoted to “crafting brave stories that tell the truth,” and she’s the spouse to a politician and the mother to twins. The latest project she produced is How It Feels To Be Free, a PBS documentary series about trailblazing Black female entertainers.

We spoke with Lacey about her ongoing process of self-discovery and getting intentional about how she spends her time.

Lacey, in your documentary Little White Lie, you unravel a family secret and explore its impact on your life. How does the element of time factor into the process of self-discovery for you? Why is it worth navigating with a slow — and sometimes painful — process like this?

Little White Lie is about my journey to uncover and come to terms with a family secret centered around my dual identity as both Black and Jewish. I filmed in real time my personal evolution of coming to terms with a secret that had been kept from me by my own family, and, in doing so, chronicled conversations with my family, including my father, for the first time about the truth of my paternity. After being raised to believe that both of my parents were white, when in fact my biological father was Black, time became the essential ingredient for my ability to work through the pain of familial betrayal.

The film, which, in many ways, was all-consuming, took almost a decade to make. At the time, it felt like an eternity. I constantly questioned whether I should be able to go through the process quicker. But when the film was finally done and premiered, I was only 36 years old and I realized that I not only had come to terms with my identity and the secrets in my family at a relatively early age — something many people never do in their lifetime — but that I also could share with others the power of difficult conversations and encourage them to lean into speaking their own truths. Looking back, I can now say that the time it took to achieve both of these things was time very well spent and I needed every bit of it to complete my journey.

How has having your own family changed your relationship to time?

I am an extrovert who was raised an only child and I’ve spent the larger part of my adult life working from home alone. I learned to deeply appreciate my own space and time and being able to have discretion over both. Now, having a family, a husband, and seven-year-old identical twin boys, has changed my relationship to time in specific ways.

Having kids and supporting my husband’s political career have significantly altered how I spend my time and what time is discretionary to me. Once my husband was elected to office — after we turned our house into a campaign office and I gave the majority of my time for the greater part of two years to working to get him elected — he had to start spending more than half of his time in Washington, D.C. or out in the district he represents. And when life changed significantly with Covid, the reality of him being away had an even more drastic effect on my life as our kids were home more, too.

At first, all those experiences brought a sense of extreme loneliness as the patterns and routines I had previously established for myself and my general grounding in my day-to-day life were disrupted. But as time passes, I am able to step back and figure out ways to reimagine my own approach and what success looks like for me.

I have learned to limit the amount of things I expect to get done in a given day. The more complicated my life feels, the more I feel compelled to keep things simple: to not overbook, and to give myself more leeway with my expectations. In my 20s, I used to triple-book my time, but I now see the negatives of multi-tasking and I try to avoid doing so. I give myself much more grace than I used to, as I have found that being hard on myself makes it all so much worse.

Like I did with my family of origin in Little White Lie, I try to live my life by identifying what I have control or influence over and making changes or using my voice accordingly. Then, I can also focus on determining what I need to accept as-is. I find that doing these things allows me to have as much positive impact on small and big spaces as I can, while having a more positive personal experience as well.

“I try to live my life by identifying what I have control or influence over and making changes or using my voice accordingly.”

Your business partner Mehret Mandefro, with whom you run your multimedia production company Truth Aid, lives in Ethiopia, while you live in Rhinebeck, New York. How do you organize your time to work with a collaborator across time zones?

How I organize my time is a lifelong journey for me. Like identity, I find it to be something that is constantly evolving and I am always re-examining. This is a journey that Mehret, who was my work wife before I was even married, and I have been on together for over a decade. Shockingly, the seven- to eight-hour time difference barely registers for us. I think that is largely because we work as-needed, rather than between specific times. We used to just work all the time, outside of sleeping, seven days a week.

Recently, we have realized that not scheduling to allow for real downtime makes us less effective creatives, not to mention miserable human beings, and therefore we are leaning into deeper and more qualitative creative time rather than just quantity of time. We have learned how to be much more intentional about the time we spend and what we spend it on.

One of the many great things about our partnership is that if something comes up in one of our lives, the other person is there to cover. Our whole model is based on the idea that 1 + 1 = 4. Anything we could do individually, we could do twice as much together. I am proud to say that after over a decade in business together this approach is still working. Our approach is one that highlights the power of abundance and rejects the idea of scarcity that too often informs spaces of business and even notions of success.

“How I organize my time is a lifelong journey for me. Like identity, I find it to be something that is constantly evolving and I am always re-examining.”

How do you visualize time?

I have been thinking about how important it is to release the idea of time as just a linear concept, and instead to embrace it as a more cyclical idea over the course of a day, a week, a month, a year. I am also thinking more about measuring the energy something takes rather than just the amount of time it takes, in order to make informed decisions about what I choose to give my energy to and how much energy it requires.

Tell us about how you set the tone for your day and your creative process.

I learned in 2020 that my days don’t start when I wake up, but when I get into bed the night before. I have started wearing an athletic performance tracker; it has confirmed that I sleep better and I’m better equipped for strain if I leave my phone outside my bedroom. So, I get in bed around 7pm or 8pm to read with the goal of being asleep by 9pm and waking at 5am.

The first thing I do in the morning is to sit up in bed and meditate. If I have seven to eight hours of sleep and start my day meditating, my ability to be creative is greatly increased. I love waking up very early to give myself time when there is no one else for me to communicate with except for Mehret in Ethiopia.

I also have an amazing therapist/life coach who I have worked with on and off since starting Little White Lie in 2006. I believe deeply in having a team of people around you who help you be the best version of yourself.

Who do you always make time for?

A friend who is having a crisis or just needs to process. I have spent countless hours on the phone with friends trying to understand life, and I have never regretted any of that time spent.

If you were making a time capsule, what would you put in it?

DVDs of my films along with a DVD player so people can actually watch them. And the book I plan on writing sometime in the next 5 years.

What makes you feel like you’ve spent your time well?

When a new project comes out, that makes me feel like I am spending my time well. I love the idea of my work being around long after I am gone.

“My days don’t start when I wake up, but when I get into bed the night before.”

Imagine you’re reflecting at the end of a day or other period of time where you felt that your time was well spent. What did you do? How did it feel? How much time did you spend doing it?

For me, time well spent involves the intersectionality of all of the most important pieces of my life: my family, my friends, my work, and my favorite things.

A day well spent is one where I give time to expressing myself: Waking up and writing for a few hours while listening to music that opens my mind or watching a cut of my latest project, followed by some quality time with my kids. Then, spending some time focusing on my body in a way that makes me feel strong and powerful, ideally a Jess Sims’ Peloton class on my treadmill. Following that, a few hours of inspiring work calls and happy hour with friends before meeting my husband for dinner at one of our favorite local restaurants with an amazing glass of red wine. I close it off by exhaling with a book I can lose myself in.

I also love those days that I can just block everything out and do one thing all day long and give my all to one project, a book, or bingeing a show. On weekends, I’d throw in a jigsaw puzzle and board game with the kids. Add traveling somewhere interesting once a month and that is truly all I need. 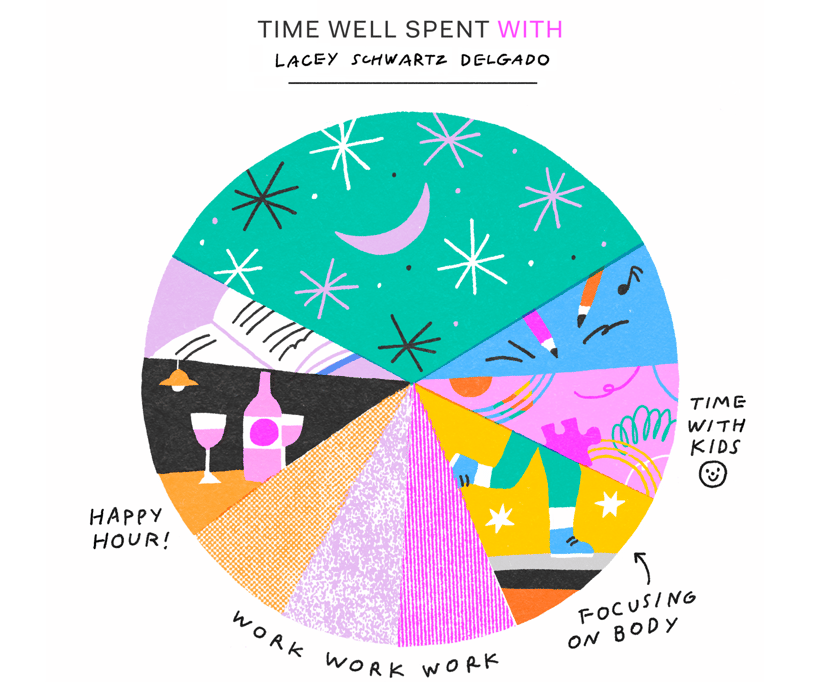 Looking to move through your days more mindfully?