Since we released Projects a few months ago, we’ve made several small but important improvements. You may have noticed the start and end dates we added in April. But we didn’t stop there. Our team’s been hard at work polishing Projects to get it working its best.

The most significant update is to the Tasks and Team tables on the Project Analysis page. If you budget your project by task or team hours, that table used to look like this:

Some items might have a budget and some might not, which made the table hard to read. We updated the design to separate items with a budget from those without, making the information much easier to scan and understand:

While we were at it, we also made two other useful improvements to the tables:

Some of you found the Project Progress graph’s tooltips confusing. That’s because the tooltip header displayed only the week you were looking at, as if the data you saw were for that one week only. However, each data point on the graph is a cumulative of all the hours up to that week. Still with me? These screenshots should clear things up:

That’s not good! We fixed this problem by updating the Project Edit form—it now shows the tasks or people that have been removed from your project: 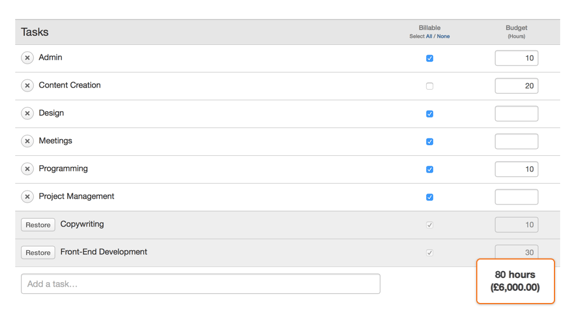 We hope these small polishes make your job easier when reviewing projects in Harvest!