Behind The Onion’s hyper-productive workflow

Part of our company mission is to help people work smarter—and that doesn’t stop with our products. We believe we can all benefit from sharing the collective wisdom of our community. So, from time to time, we dig into the inner-workings of our customers and share what we’ve learned with you. We hope these stories provide some insights and/or inspiration that you can take back to your own work. Drop us a line and let us know what you think!

When you think of how The Onion works, you might think of their legendarily tough editorial meetings: writers reading out lists of potential headlines, hoping to get a laugh (or at least a chuckle) of approval from the other very funny people sitting around the table. You might think of ClickHole, which parodies clickbait culture under its motto that “all content deserves to go viral.”

You probably don’t think about the nuts-and-bolts of how The Onion produces such a high volume of hilarious content every single day—but the truth is that’s just as impressive. 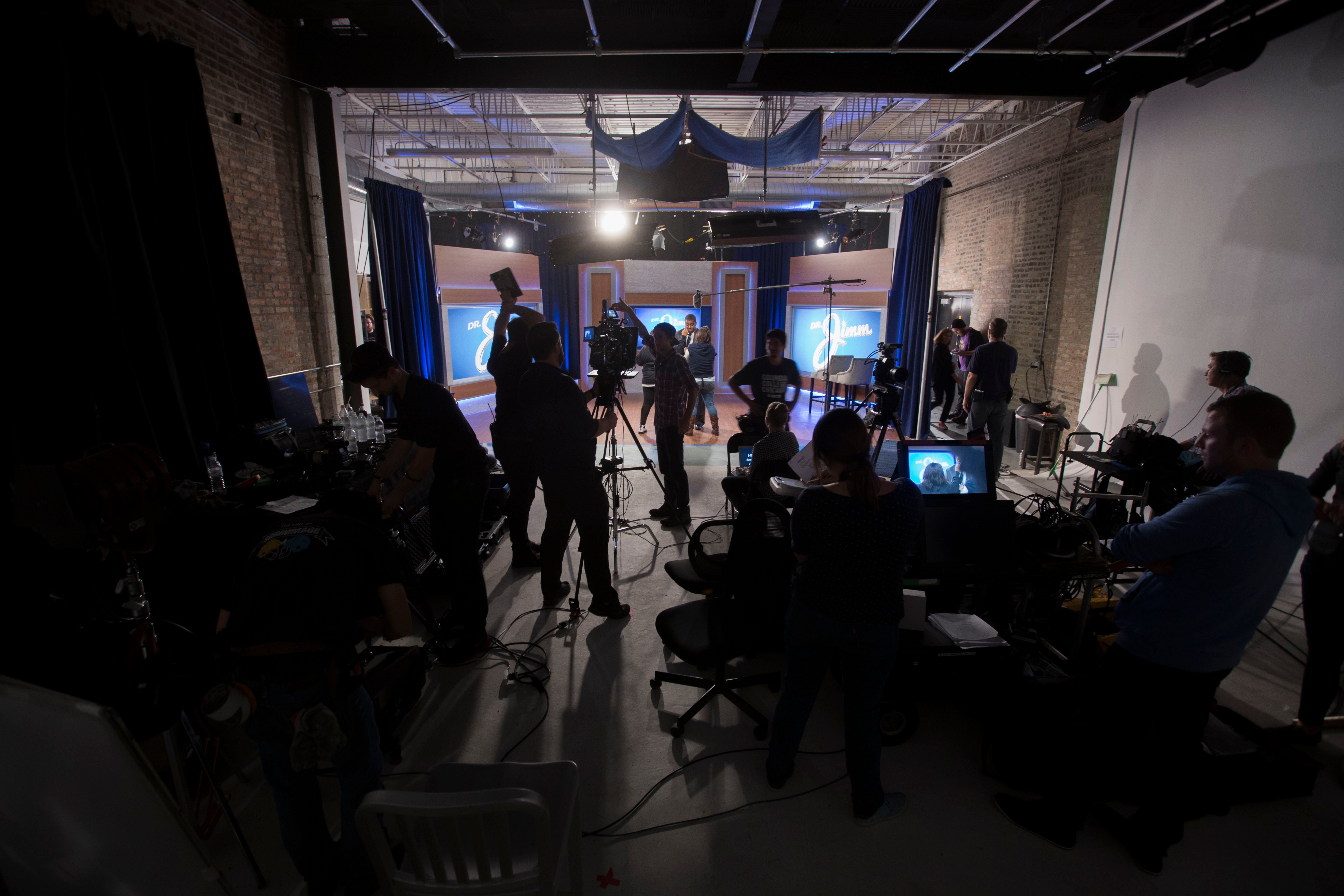 The Onion was born in Madison, Wisconsin as a weekly print paper and quickly acquired a reputation for their satirical take on the news. They started publishing their articles online earlier than most publications—in the spring of 1996—to stem the flow of “bootleg” versions being disseminated without proper attribution.

Today, The Onion is fully online, with five properties (The Onion, the A.V. Club, ClickHole, Onion Labs, and Onion Studios) and partnerships with film companies like Lionsgate.

We knew that bringing The Onion into the 21st century had to mean bringing their workflow along too—they’re a Harvest customer, after all—so to get the full scoop, we reached out to Rick Livingston, director of post-production at The Onion.

The takeaway: While it appears that the work The Onion does comes out of some kind of hilarious, dark chaos, it doesn’t—there’s a very rigorous and planned-out process that undergirds the entire workflow, especially the editorial/production relationship.

1. Plan projects with the whole team

Some publications insulate the process of planning from production and editorial. One group of people sets the timelines for projects, and another group executes. This compartmentalizes the different functions of the team, and can make the planning process more efficient. The problem is that it can also lead to unrealistic deadlines being set and people feeling left out of the process.

At The Onion, every team that’s going to be involved in actually creating a piece of content, from editorial to post-production, gets together to plan projects. The list of ideas is brought out, and they’re whittled into something that the team feels confident they can deliver on.

“It’s a very collaborative environment here,” Rick says. “We’re all weighing in from the beginning of the idea stage, looking at our schedules, and scoping out what we can do in the timeframe we have. We’ll sit down with the writers, and all of us will weigh in in terms of what’s feasible.”

Once the team has an idea of the creative direction for a particular project, they sketch out what combination of people, resources, and time will be needed to do the job.

“We’ll use Harvest to build a project for it,” Rick says, “and then we’ll assign users to it and basically track it through there. We use Forecast to schedule our production and our post-production staff, so we know how they can handle the amount of projects that we have coming down the pike.”

Since Rick works on post-production, he mainly works with videos. About 200 to 300 come in every month, some of which crop up at the last minute and need to be handled quickly.

“[Forecast] has been really great to know right up front when we have five projects coming in within one week. For example, if we know that we’re really booked, we know we’ll have to go out of house to bring in talent. It’s really helpful in speeding along the pipeline and knowing what’s coming.”

Once a project is planned, writers and producers at The Onion get to work.

Before The Onion, Rick had tried to get time tracking set up at his last company. It was not easy. “I came from a startup company,” he says, “And it was very difficult to get everyone to submit time.”

Getting people to track time is a common business pain. Time tracking can feel like a burden that doesn’t add short-term value. But at the Onion, Rick found a team that was on board with the idea of time tracking from day one.

“We rolled it out and everyone was submitting accurate time right off the bat. It’s part of the culture—everyone is invested in the company, and we really want to make sure we know how much money and time we spent on a specific video.”

Bringing time tracking into their workflow wasn’t too much of a challenge either, as Rick and his team found that they could largely integrate it into what they were already doing.

We integrate Trello with Harvest, and it’s pretty amazing. Once the project is created in Harvest, that triggers our producers, and they create a task within Trello.”

“Then a few of our editors and production staff will start using the timing and tracking extension within Trello to track their time for that specific task,” he adds.

Each piece of text, images, or video that needs to be created for a client becomes a Trello card, and the people working on each respective card track their time right in the app.

The key to meticulous tracking like this is that it allows them to go back after a project has been completed, and see how the amount of work they did compared with their expectations.

“The most difficult part of management is getting the relevant information,” as consultant David Maister says. “Processing it to arrive at a good decision is relatively trivial.”

The incremental effort expended in tracking time is like accruing compound interest on a bank account—it pays off in multiples down the road.

3. Review the metrics and improve

After each big project, The Onion uses their planning and time tracking data to assess the opportunity cost, profitability, and amount of resources that were required to get it done.

“Any type of new project—animation, for example, which is new—that can be potentially a big project in terms of hours, we’ll look at the postmortem of ‘predicted versus actual’,” Rick says.

“We’ll have goals in terms of the type of video we want to produce, and we’ll have a goal for how many days we want it to stay in production, and that’s what we track against. The dollar figure is important for us, but from a producing standpoint, it ultimately comes down to the hours.”

Like with just about any other creative services agency, time is the scarcest and most critical resource, often more so than money.

You have hundreds if not thousands of different micro- and macro-deadlines all throughout any given month. Miss one, and your relationship with that client takes a hit. Miss too many, and you can lose them. Figuring out how you and your teams should be spending their time is the biggest challenge in resourcing.

“What’s important for us is that we’re budgeting to realistic expectations and that writers aren’t writing for videos that we can’t make. The Onion’s very good at finding that sweet spot as far as the kind of video content that can be timely and not break the bank.”

Today, in addition to the aforementioned hundreds of videos per month, the Onion is working on animations, commercials, film deals with studios like Lionsgate, and TV shows like The A.V. Club hosted by John Teti.

If your agency has tried to enter an adjacent space, you know how intimidating and nerve-racking it can be to try to succeed somewhere that your approach hasn’t been proven.

The important data that we care about at the end of the day is, “How much time are we spending on a majority of these projects?”

At The Onion, creating meticulous records of how long each new project takes is essential to growing the business and doing new kinds of work. Without the constant feedback that time tracking gives them, they don’t know if their new bets really make sense for the business.

“The important data that we care about at the end of the day is how much time are we spending on a majority of these projects… [Forecast] has really changed the way that we tend to schedule things out and put people on projects to ensure the right utilization.”

The Onion, from soup to nuts

The fact that The Onion does all of its own sales, video, post-production, editing, and writing lets them get work done on what Rick calls an “accelerated timeline.”

They don’t have to wait on anyone to get their work done. And when a part of the process isn’t working, they can zero in on the cause instantly and make a change.

With time tracking embedded in their tools, a strong, team-wide project management culture, and analytics flowing freely throughout the organization, the Onion has built a modern-day editorial workflow worth copying.