Have you ever gone to your Team section and asked yourself, “How do I get this report to show me just the people I’m most interested in?” Maybe you want to know how billable your designers are, what your developers are working on, or which team might be overworked.

Good question, and good news. We’re working on a feature that’ll allow you to get answers quickly, and it’s called Roles.

Roles are descriptors for your teammates, and allow you to specify what role each person plays in your company: Designer, Manager, Copywriter, etc. When we launch in a few weeks, we’ll share more details about how we envision these roles being used.

Today, however, we want to tell you about some important changes we’re making to support roles, so you know what to expect.

Roles will replace your existing Departments field. When we launch roles, anything currently entered in someone’s Department field will become a role. This field appears on every person’s profile, like this: 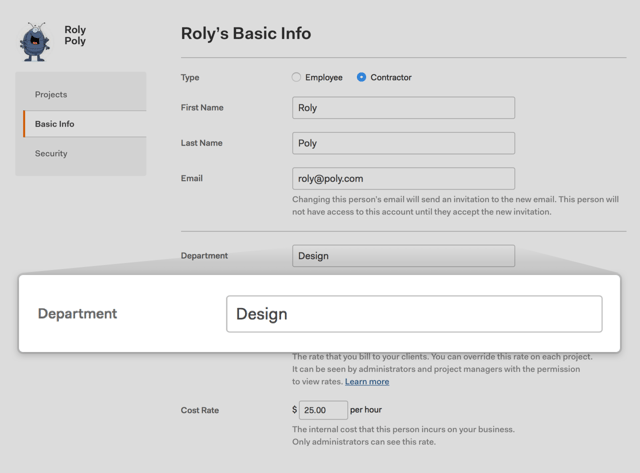 To support roles, we’ll update some of the exports and imports you might use:

Roles Will Sync with Forecast

If you have a Forecast account linked to your Harvest account, roles will automatically sync between them:

We think this’ll be helpful to keep your accounts in sync, and it’ll prevent you from having to double-enter info.

When Will We Launch?

We’ll be launching Roles within the next few weeks.  If you have any questions, are concerned about these upcoming changes, or just want to chat, drop us a line!