SuperMango Media is an interactive agency specializing in helping funny people strategically brand themselves. By continually evolving, SuperMango Media has been able to nimbly navigate from the idea of a business, to securing funding, to functioning as a profitable company in a short amount of time. We got to chat with founder Dan Allen about his love of comedy, how to set prices, and how Harvest helps them win jobs. 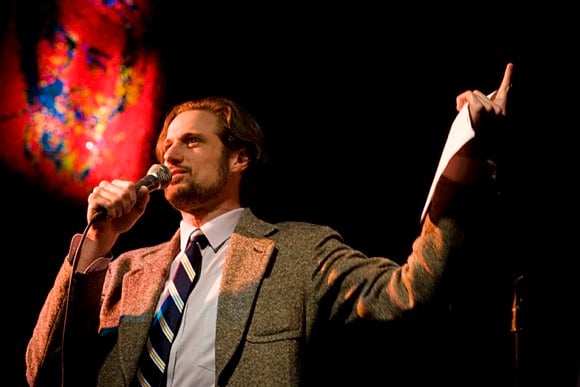 What’s your connection to comedy?

I started comedy in Virginia Beach in 1998, moved to NYC in June 2001 and landed a spot on Comedy Central’s Premium Blend in January 2005 (which feels like eons ago, and I think it was hosted by Jack Paar).  I moved here knowing literally two people (non-comedians, or civilians as we call them) and only interacted with people in the comedy world. I created Astoria Basketball League, a basketball league composed entirely of comedians (although we are considering of changing it to Ankle Brace Association since I’ve moved to Williamsburg and we are all aging). In March 2008, my buddy and I started to produce our monthly show SACAPUNTAS!. In January 2009, I started to produce IN THE TANK, a podcast interviewing successful comedians with my friends and comedians Jon Fisch and Dan Shaki, both of whom have been nominated for an ECNY Award (Excellence in Comedy). Each category had about 400 nominations and we are in the top five for Best Variety Show and Best Podcast.

What was the inspiration for starting your company?

In September of 2008, I quit my day job, I sublet my apartment, obtained a work permit for the UK, bought a ticket to London and was planning to leave the country to start a new life. Unfortunately, my plans dissolved the day before the death of Lehman Brothers (or as I like to call it, the beginning of the “New Great Depression”). I could have easily slipped back into my old life, but I decided to take it as a sign. I left to campaign for Obama in my home state of Florida, and came back to NYC re-invigorated with passion for the USA. I decided to start freelancing my design and development skills, which led to the creation of SuperMango Media, which helps fellow comedians with websites and branding.

What’s FastTrac, and how did it help you launch your business?

I would have never heard of the program if it wasn’t for Cheni Yerushalmi, the managing partner of Sunshine Suites. In April of 2009, I hosted an event he was co-producing BootUp NYC at Webster Hall. He appreciated what I did for him and said,  “If there ever is anything he could do for me, just ask.” So a few months later, I did. He sat down with me for an hour and we came up with a game plan, and he enrolled me in FastTrac. If that wasn’t enough, he also gave me a few months of office space to help create a stronger foundation. I attended the class, tuned my business plan and met 30 different individuals in my situation. I still retain a strong relationship with several of my classmates, and we created a Google group to constantly feed each other information and crowdsource questions about our business.  I have also maintained my ties to the facilitators at Fast Trac, and attend events there.

Do you have advice for other seedling small businesses that has been fruitful for you?

Had you managed a team before? If not, was there any transition between being a freelancer to running the show?

Prior to SuperMango Media, I had never managed freelancers, though I did have experience with large teams. For seven years, I was a project manager at LaGuardia Airport, and handled up 90 employees — it was ordered chaos everyday. We had blackouts, blizzards, fires, gypsy cab hustlers…you name it, our staff had to handle it. That’s where I learned how to manage people. Obviously, it was slightly different when I started working with designers and developers.

Do you calculate rates by the project, or by the hour, or a mix of the two?

Initially, we would take jobs on as flat rate but learned quickly 2 or 3 underestimated jobs can bring the ship down. Once we figured that out, we only take jobs on as an hourly rate.  However, we strive to stay within the original estimation or the budgetary constraints of the client.  Since we specialize in such a niche market, our estimations (we like to call them promises) are solid because all the clients relatively ask for the same thing. With each new job, we can analyze and record how long each step takes.

There are so many things that I love about Harvest. One is the retainer invoice feature.  The majority of our projects are set up with the following payment structure: 35% deposit, 35% upon client approval of design and 30% upon completion. I’ve used other invoicing services and I had to come up with creative solutions to do this. With Harvest, I can simply set up a retainer for each client and apply it to the correct project. Also the ability to assign a contractor to a job and have him submit his timesheet internally has reduced my headaches a thousand-fold.

One example of how we use Harvest is in our process for developing a website. Each site is a multi-step process, which we are constantly streamlining. The basic steps are planning (information architecture, wireframing, sitemap), design (sketch, revisions, final), development (front and back end), content entry, testing, troubleshooting and going live. After the client fills out a form and schedules a meeting/call, we send an estimate through Harvest based on the information they provide.

Tell us what SuperMango Media has on deck next?

We welcome SuperMango Media to our talented group of Harvest New Founders, and are happy to support their focus on comedy and code!