A New Design for Harvest Expenses

Before starting Harvest, Danny and I ran a small web design studio. As contractors for some of our clients, we had to submit weekly time and expense forms—gotta get reimbursed for gas and all the ham sandwiches we ate! When we launched Harvest in 2006, we didn’t include expense tracking in our initial version, but soon added it a few months later.

We’re excited to start 2014 with our shiny new Harvest Expenses (the third incarnation, if you’re keeping track). In this first round of updates, we focused on overhauling the front-end code, with a few selected changes in the back-end that will allow us to bring new features to Harvest Expenses later this year. 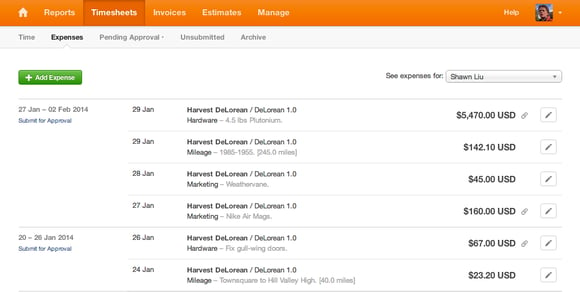 We’re dropping the current weekly expenses view in favor of a ledger-style display. In the soon-to-be-retired version, we show expenses one week at a time, which makes it unnecessarily difficult to review or to enter past expenses (you have to click multiple times to get to the right week).

The new expenses view shows a hundred most recent expenses on the initial load, likely to cover the past few months’ worth of entries for review. To enter a new expense, there’s a handy date selector—so you can say goodbye to that multiple-click navigation. To make that change we had to alter the entire structure of our expenses’ display—which turned out to be a lot harder than it sounds!

Some other smaller improvements we’ve made:

All of us here at Harvest use our expenses feature to track everything that needs to be reimbursed. We’re excited about these latest updates and hope you find them as useful as we do. Thanks for your continued support, and we look forward to hearing your thoughts!

Update (March 4th, 2014): We just added Weekly Totals to the interface. Thank you for all the feedback, and we hope to bring more improvements to Harvest Expenses later this year!