Letting go of clients is a painful decision. You become invested in their business and want them to succeed. But sometimes the economics of a client relationship just don’t work out.

At the end of the day, every business needs to turn a profit. If you discover you’re losing money on a client, it may be time to part ways. But how do you figure this out? Your intuition might be telling you a client isn’t working out, but you need data to be 100 percent sure.

This is the position Shareef Defrawi, president and founder of Bonafide, a Houston-based digital marketing agency, found himself in when he decided to take his business in a new direction. Bonafide began life as an SEO agency, but as the digital space evolved, Shareef realized he could better serve his clients by embracing a more holistic marketing strategy. This new approach drove considerably more value—but at a higher price.

While most clients saw this as a worthwhile investment and dove in headfirst, some chose not to pursue the new direction. Shareef, however, was hesitant to part ways:

We’d developed close relationships with these clients and letting them go, to me, was not an option. Not to mention it would’ve amounted to a loss of about 15 percent in gross revenue and possibly some staff cuts. So we decided to keep servicing these legacy clients despite the new direction I was taking the agency. After some time, however, I started to suspect that some of them were holding us back and preventing us from properly developing our new value proposition.

Many agencies find themselves in a similar predicament. They suspect that certain client relationships are no longer fruitful for both parties, but they have no way to substantiate their hunch. That’s where time tracking comes in.

What to Look For

Once you start tracking time on all your projects you can look for data that might indicate the relationship is not the best fit. Here are three red flags to look out for:

This one’s a biggie. You need to make sure total costs don’t exceed the amount of money you’re bringing in.

You can figure out your total costs by assigning a cost rate to everyone who works on a given project, based on their salary and other factors, and then having them track their time. When you add up all the hours each person spent on the project, and add in any expenses, you get a rough picture of how much the work is costing you.

Compare this to how much the client is paying you for the work. If a client’s work routinely costs more than it brings in, it’s time to either renegotiate your contract or part ways. 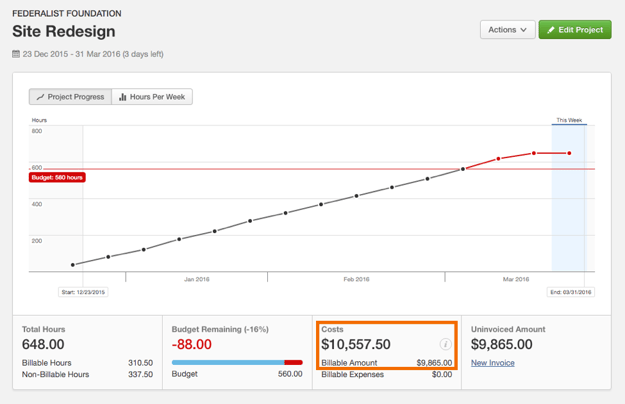 Take this site redesign project, for example. The above graph represents all the time tracked to the project relative to its budget. Based on how much time was tracked, Harvest can calculate the total cost of the project, as well as the total billable amount you can charge your client. This project, for example, cost $10,557.50, but only brought in $9,865. That means this client probably requires some attention. Harvest users can find this graph in the Projects section.

2. Employees would be more efficient on other projects

Even if a project is profitable overall, that profitability can still disguise inefficiencies that might be slowing down your business.

Drill down and look at costs and billable hours for each individual. In many cases, a team member could earn more money if they were working with a different client.

Take Aaron Burr in the example below. During his work on Project A, he spent forty hours in meetings and thirty-four hours doing research. The project overall was still profitable, but his contribution was not. 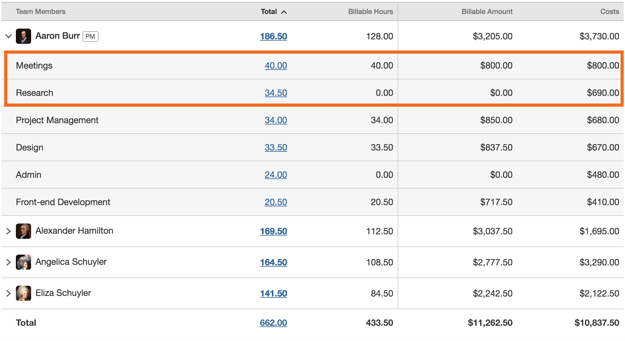 Harvest users can find this report by going to the Projects section, selecting a project, and clicking on the Team tab.

Compare this to Project B, below. Aaron spent less time sitting in meetings and less time doing research, which cost the agency less and freed him up to do other work. Additionally, this project included an SEO component, which was a nice added billable task that made Aaron’s overall work on Project B more profitable. 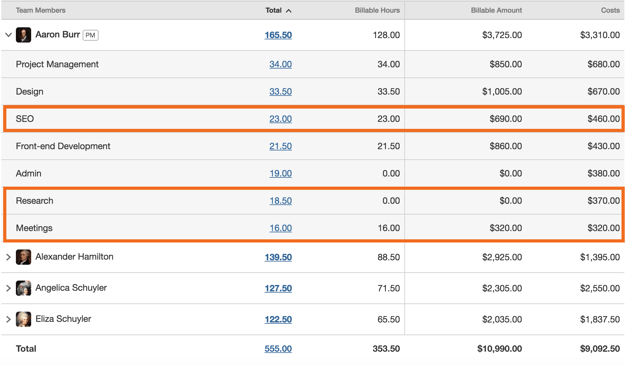 In the future it might make sense to shift away from projects that bog down some of your most valuable employees in meetings or research and shift them to projects that play to their strengths.

3. The project steals time from other work

If a project doesn’t leave you with enough time to focus on other work, it might be time to say goodbye. The project below turned a profit, but it also significantly exceeded its budget—the amount of time the agency expected, and wanted, the project to take.

You can see that meetings were the biggest culprit. They went way over what was allotted, likely because the client demanded more face-to-face time.

With Harvest, spotting overages is as easy as looking for the red bars in the Projects section.

All these meetings weren’t unprofitable, per se, but they come with an opportunity cost. That was time the team could have spent working on other, possibly more profitable, projects, winning new business, or working on the agency itself. You want to look out for meeting overload because it can also come with a human cost if team members get burned out.

Data is a useful guidepost, but there are other factors to consider before you sever ties. Here are some reasons it might be worth parting ways with a client that does bring in money:

Conversely, there are good reasons to keep an unprofitable client around:

How to Handle the Conversation

Coming to a decision is hard enough, but breaking the news to a client can be even harder. Here’s how Shareef handled the situation once he looked at the data in Harvest and decided to part ways:

I decided to take a data-driven approach to having an honest, productive conversation with legacy clients we were losing money on consistently. I asked for a meeting to discuss the relationship. I shared reports and showed them the hard numbers. Not only had our profit margins eroded over time, we had been consistently losing money for months. I was able to illustrate that the time spent in unproductive meetings was diverting major resources—not only from their campaign but from other clients as well.

I made it clear it wouldn’t be fair to either of us if we kept them on and we would have to go our separate ways. Although they weren’t thrilled, they understood. The owner of the business expressed his respect for my communicating openly and honestly about the matter.

As Shareef mentioned, being upfront and transparent with your client can make parting ways as painless as possible. Here are some tips to ensure your client doesn’t leave with a bad taste in their mouth.

Parting ways with a difficult client might be painful, but ultimately it can help your business improve and evolve. But in order to make informed decisions you need data. That’s where Harvest comes in. Try Harvest free for thirty days and see for yourself the wealth of data made available by time tracking.